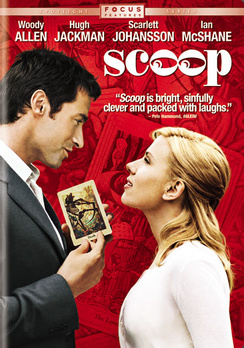 SKU 025193121325
$4.00
In stock
1
Product Details
The late U.K. journalist Joe Strombel (played by Mr. McShane) is being mourned by his colleagues - even as, stuck in limbo, Joe remains committed to pursuing a hot tip on the identity of 'the Tarot Card Killer' at large in London. But how can his legwork get done now? Via the very much alive Sondra Pransky (Ms. Johansson). Sondra is an American journalism student visiting friends in London. During a stage performance by another American, magician Sid Waterman (Mr. Allen), Sondra is shocked to find herself able to see and hear Joe. From beyond, he gives her the scoop of a lifetime and urges her to pursue it. Sondra immediately starts chasing the big story, enlisting the aid of a reluctant Sid (a.k.a. Splendini). That chase leads right to handsome British aristocrat Peter Lyman (Mr. Jackman). Soon, Sondra finds that the romance of her life may well be the dangerous scoop she's looking for.
Save this product for later