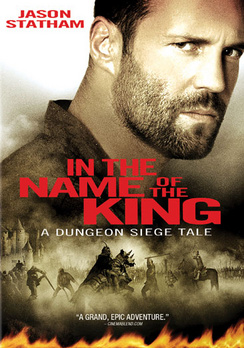 In the Name of the King: A Dungeon Siege Tale - Widescreen - DVD - Used

SKU 024543509110
$4.00
In stock
1
Product Details
A simple family man (Jason Statham) is forced to take up arms after an evil sorcerer (Ray Liotta) unleashes an army of bloodthirsty beasts that destroy his small village and capture his beautiful wife (Claire Forlani). As the marauding forces overrun the land in an effort to overthrow the king (Burt Reynolds) and his loyal magus (John Rhys-Davies), the once peace-loving peasant and his two companions (Ron Perlman and Will Sanderson) venture into perilous, uncharted terrain on a daring rescue mission. In this breathtaking fantasy adventure, director Uwe Boll conjures up a medieval world filled with royal treachery, dark magic and spectacular battles, all set against some of the most awe-inspiring vistas ever captured on film.
Save this product for later