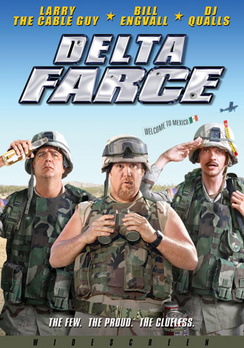 SKU 031398218098
$4.00
In stock
1
Product Details
Down on his luck after losing his job and his girlfriend on the same day, Larry decides to join his neighbor, Bill (Bill Engvall), and his combat-happy buddy, Everett (DJ Qualls), for a relaxing weekend of drinking and target practice. But when the three hapless guys are mistaken for Army Reservists by the hard-nosed Sergeant Kilgrove (Keith David), they're loaded onto an army plane headed for Fallujah, Iraq -- and mistakenly ejected in a Humvee somewhere over Mexico. Convinced they're actually in the Middle East, the clueless wannabe soldiers save a rural village from a siege of bandits and become local heroes. But when Carlos Santana (Danny Trejo), a ruthless, karaoke-loving warlord, strikes back, Larry, Bill and Everett have to lay down their beers and take up their arms -- and prove they just might be real soldiers after all.
Save this product for later
Display prices in: USD